Leave for the South of France, in Catalonia, at the border of Spain with your painting Tempête en Pays Catalan by artist Maryse Casol!


2004
2004 was a great year! Maryse Casol, after completing her studies in arts in 2003 at l'Académie des Arts et Beaux-Arts de Varennes, publishing her first book for $12,000, building a collection of over 30 paintings, and showing some of them at 3 exhibitions at the Novotel Hotel, Marriott Chateau Champlain Hotel and the Mount Stephen Club, teamed up with her son Mickaël Casol, 1st year student at HEC Montreal, to organize a solo show near the University. The exhibition was a success, with all the community being present at the event, including friends and family, but also top business executives, lawyers, doctors, athletes, professors and the National TV. Your painting Tempête en Pays Catalan by Maryse Casol was part of the show. Why was 2004 great to you?!


1990s
In the 1990s and early 2000s, Maryse Casol with her family would spend her summer, and sometimes winter vacations in the small village of Baho in the South of France, located near the Mediterranean sea and Spain.

Tempête en Pays Catalan is imbued with chromatic musicalities, forms and rhythms reflecting sensitivity, beauty and femininity, values expressed by the symbolism of its compositional elements.

The Catalan Country, land of immortality, between the Mediterranean Sea, the Pyrenees mountains, volcanoes, winds and sun, nourished by contrasts of the four elements, water, earth, fire and air, principles of life!

Tempête en Pays Catalan evokes the Albères, a region with a powerful and captivating character, which I am passionate about.

The Albères, between Sea and Mountain (Mar I Muntanya, in Catalan) : "Where the Perthus pass draws the V in the mountains which saw the Roman emperors and armies of Hannibal passage, at the crossroads of Via Domitia and Via Augusta, there begins the kingdom of Albères, and its promise of dawn" : Marie Costa.

Source of inspiration for many artists for its Mediterranean light, Collioure, flooded with sunshine, remains forever engraved in my memory, like a beacon in my subconscious.

"The immortal Collioure, memory of the past greatness of the Kings of Majorca, cradle of Fauvism with its marine church which has become an essential motif in modern painting" : Marie Costa.

The sea is the symbol of the dynamics of life, place of births, transformations and rebirths, image also of the subconscious and its immensity. Among the mystics, the sea symbolizes the world and the human heart, as the seat of passion. Source of life, the sea is an eminently feminine symbol.

The boat is the symbol of the voyage, of an accomplished crossing. It also expresses the sense of womb and security. Symbolically, it promotes the crossing of existence, as well as existences.


"It’s great to be in a storm-battered ship when you can be sure it will not perish." : Blaise Pascal


"Poetry must reflect through colors, sounds and rhythms, all the beauties of the universe" : Mrs. Germaine de Staël

Red is the colour of passion and the principle of life. Bright red is the image of ardour and beauty, while dark red represents the mystery of life. In Tempête en Pays Catalan, the vermilion red expresses my exaltation for life, love and the act of painting, while the dark red cadmium translates the mysterious beauty of woman and the life which she gives.

The orange, composed of yellow and red, symbolizes vitality, fertility, and sensuality, but also any form of psychic energy (according to Jung).

Purple and blue-violet are the symbol of temperance and wisdom.

The blue symbolizes knowledge and dreams, and as a result, my passion for knowledge and escape through dreams. Blue is the most immaterial of colours. It is the way to the infinite where the real turns into the imaginary. According to Kandinsky, it attracts us to infinity and awakens in us the desire for purity and a thirst for the supernatural. We therefore understand its important metaphysical significance.

Green symbolizes the regeneration and awakening of life. It is the colour of hope, strength, longevity and immortality.

Yellow is the warmest of colours. It symbolizes sacredness, the golden light, and eternity.

Grey is the symbol of mystery and elevation, but also the rebirth of an idea or an emotion. In the artwork, it energizes the colours to enrich them with their greatest intensity. Thanks to grey, the emotional power of the surrounding colours is intensified, magnifying the explosive beauty of emotions! Here in “Tempête en Pays Catalan", grey represents the mystery of life, love and rebirth through the power of the feeling of love.


"The artwork is a lyric poetry reflecting all the beauties of the Being and the universe" : Maryse Casol.

The composition of the artwork shown here, Tempête en Pays Catalan, is a narrative, made in post-Fauvism.

In a narrative composition, some elements are arranged horizontally at the edge of the painting, in a eurythmy of forms, proportions and colours, expressing harmony, tranquility, serenity and fulfillment, and the other elements, symbolically the main ones, vertically on the skyline, reflecting the perspective of the future.

Fauvism is an art movement whose evolution spread out only from 1903 to 1910, but which is the substrate of modern art. The word "fauve" is used for the first time by the art critic Louis Vauxcelles, during the Salon d'Automne of 1905 at the Grand Palais in Paris, who exclaimed: "Donatello among the wild beasts!" (with reference to the 2 sculptures in marble by Albert Marquet in Renaissance style, standing among these Fauvist paintings), seeing the works of the painters, in pure and vivid colours on exhibition by Henri Matisse, André Derain, Albert Marquet, Maurice de Vlaminck, Kees Van Dongen, Charles Camoin and Jean Puy.

Fauvism expresses the sense of looking at oneself : ontos. (ref. definition of onto: Element, from the Greek ôn, ontos "being". Colour translates into a search for oneself. It is ontocolorism.

Fauvism art deconstructs nature to mould it according to the individuality of the painter. It is symbolized and exalted by colours. The space is combined by the chromatic exaltation and the eradication of perspective.

The eradication of perspective by raising the horizon line in the work is a way of expressing the present time (presentism). The truncation of some elements is a very important parameter, allowing to express the kinetics-temporal (movement in time), and kinetics-light effects (movement of light which becomes the subject). Hence, in the Maryse Casol painting “Tempête en Pays Catalan”, the combination of movement, time and light, is the principal subject of the work.

The expressive power is created by the purification of the flat shapes, the exuberance of colour, and the simplicity of large deconstructed spaces. 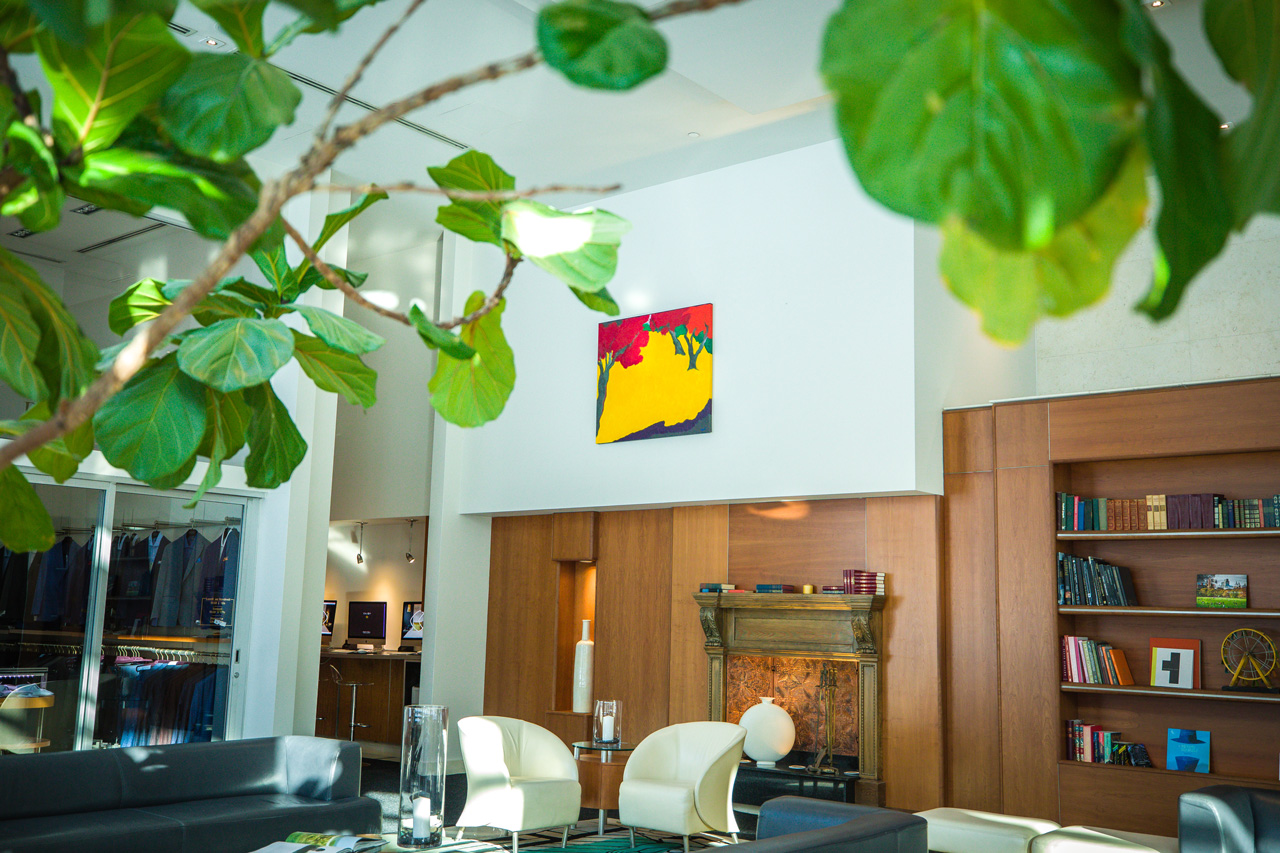